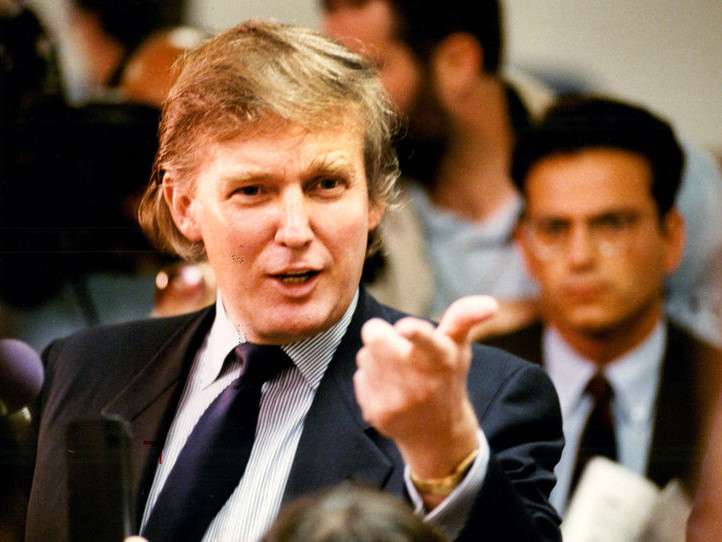 This first appeared as an Op-Ed column in The New York Times on March 9, 1985

Donald Trump, the developer, is in the newspapers almost every day for one thing or another. If he isn’t building a skyscraper castle or a football team, he is trying to harass some tenants out of one of his properties.

It’s strange for a young man who so craves achievement, recognition, respectability and acceptance to mix into his master-builder activities the petty act of abusing tenants. Yet, though hard to explain, there seems little doubt that it has happened. Both the city and the state, in detailed papers, have brought actions against him for mistreatment of tenants — the state in an administrative proceeding and the city in a lawsuit seeking heavy fines.

The case involves the rather nice 15-story building at 100 Central Park South, overlooking the park. He bought it in 1981 with the intention of tearing it and the adjacent building down (the Barbizon Plaza, which he also owns) and replacing them with another of his mega-luxury towers. The curious thing about his plans is that he knew that the building was pretty much fully occupied and that the apartments were protected by either rent control or rent stabilization.

The city and state papers allege that Mr. Trump and his agents proceeded to try to force out the 60 or more tenants by the following tactics: ”threats of imminent demolition,” ”spurious litigation,” ”drastic decreases in essential services,” ”persistent delay in repairing defective conditions with life-threatening potential,” ”instructing employees to obtain information about the private lives (and) sex habits of the tenants,” and ”engaging in a psychological tug- of-war to wear the tenants down which has had a deleterious effect upon the health and well-being of said tenants, many of whom are elderly and are particularly vulnerable to defendants’ persistent course of conduct.”

In sum, the city’s lawsuit, which was filed last week, says that ”defendants have harassed daily the occupants of said units” and that ”defendants’ wrongful acts and omissions continue to date.”

This legal action is like the ones the city brings against slumlords because – unfortunately – Mr. Trump in this instance is behaving like one.

He contends that he is the victim of wily, wealthy millionaire-tenants who are trying to extract exorbitant buyout money or other financial concessions from him. Yes, there are some well-to-do tenants in the building who have a very good deal living there at low, controlled rents. But most of the tenants are either average working people or elderly pensioners living on small fixed incomes, such as Social Security, who have lived there many years. Mr. Trump, the preponderance of the evidence suggests, tried to force these people out on the cheap. This is a man whose net worth was recently estimated at $400 million. He says he’ll fight the case all the way.

”Trump is not going to be harassed,” he told a Times reporter. Mr. Trump’s friends and supporters say he’s done a lot for the city with his developing and deal-making skills. There’s truth in this, for his Hyatt hotel and his Trump Tower have created jobs and economic activity. But does his contribution to the city’s economy excuse him from civilized behavior? Is he exempt from obeying the city’s laws? Though the press has not exempted Mr. Trump, it has generally treated him in a kindly fashion.

His behavior on Central Park South has received but sparse coverage. Though it would normally be defined as substantial news when the city sues one of the biggest developers in town, only one of the three daily newspapers carried the story.

Mr. Trump’s other activities and lavish life style get a lot of space in the press, local and national. A recent profile in The Washington Post quoted him as saying he was ready to take on new, world-sized tasks — referring to his heretofore unrevealed wish to become the nation’s negotiator on arms limitation with the Soviet Union. He says he’s a master negotiator, and could do a better job on arms talks than ”the kind of representatives that I have seen in the past.” Becoming an expert on nuclear weaponry would be easy, he said. ”It would take an hour and a half to learn everything there is to learn about missiles,” he explained. ”I think I know most of it anyway. You’re talking about just getting updated on a situation.”

Maybe Mr. Trump should take the afternoon off to study up on missiles and leave the tenants of 100 Central Park South alone.