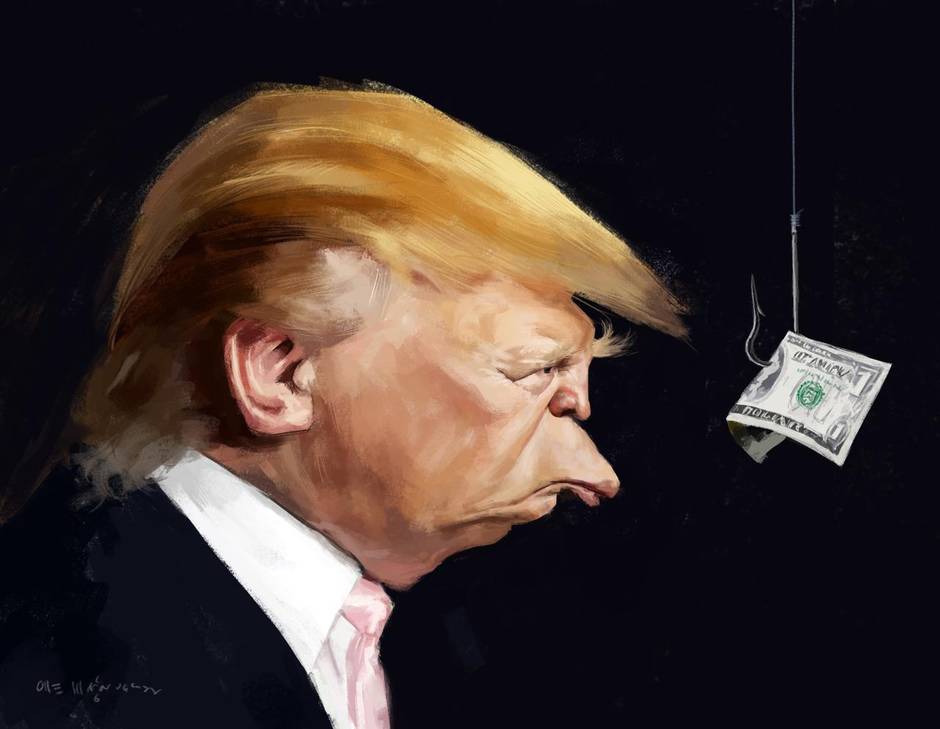 This first appeared in The Village Voice Tuesday, January 24, 2006

In a world of genocide, terrorism, global warming, and the Asian bird plague, what would the press do for levity without Donald Trump? Take a look at his latest comedy routine. Trump — about whom the only certainty is that he lacks the tiniest smidgen of an acquaintance with the truth — has filed a libel and slander lawsuit against a reporter for writing a book that Trump says is untruthful.

The reporter is Timothy O’Brien of The New York Times. His book, which debuted in late October, is TrumpNation: The Art of Being the Donald (Warner Books). The lawsuit charges that O’Brien has defamed Trump by writing that the real estate promoter and full-time celebrity, who boasts that he’s a billionaire many times over, “was not remotely close to” a net worth of even $1 billion.

The suit contends that Trump provided O’Brien with all his financial documents and gave the reporter hours to pore over them. O’Brien says the documents he was shown were marginal or useless in determining net worth. He says Trump refused to let him see any pertinent documents specifically his tax returns, bank statements, an accounting of his debts, and his casino reports to New Jersey’s Division of Gaming Enforcement.

In the past, Trump has publicly laughed off his critics, including myself. Somehow, O’Brien’s downgrade of his wealth struck at Trump’s visceral essence: his value system of measuring himself solely by his publicized net worth.

Anyway, the suit says the O’Brien book has cost Trump, in just the three months since it came out, a minimum of $2.5 billion. Those are the damages Trump seeks”in no event less than $2.5 billion.” Trump’s lawyers give no details on how this disaster has occurred. On the other hand, we should recall that Trump has gone into corporate bankruptcy (on his casino “empire”) twice in recent years first in the ’90s and again last year.

The arithmetic, however, is interesting. The Forbes annual list of the 400 richest Americans placed Trump at No. 83 in its latest tally and set his net worth at $2.7 billion. If he has suddenly lost at least $2.5 billion and the book is still causing havoc then Trump must be close to busted.

Oddly, in his lawsuit, Trump offers only the Forbes list which is viewed by financial analysts as anything but scientific as evidence of his billionaire status. Yet in 1990, in Surviving at the Top, here is what Trump wrote about the validity of the list: “It always amazed me that people pay so much attention to Forbes magazine. Every year the Forbes 400 comes out, and people talk about it as if it were a rigorously researched compilation of America’s wealthiest people, instead of what it really is: a sloppy, highly arbitrary estimate of certain people’s net worth.”

Since I have periodically chronicled Donald’s adventures over the years, a sampling of the history might help us better understand him.

1980: Donald was demolishing the Bonwit Teller building on Fifth Avenue to make way for Trump Tower. He promised to save two 15-foot-high Art Deco friezes on the building’s facade and donate them to the Metropolitan Museum of Art. But when it became clear that saving the sculptures would be costly, Donald destroyed them instead. “My biggest concern,” he explained, pretending to honor the truth, “was the safety of the people on the street below. If one of those stones had slipped, people could have been killed.”

1983: Donald tried to drive the tenants out of 100 Central Park South so he could raze the 15-story building and put up a skyscraper. He failed to empty the building because the city sued him for cutting the building’s “essential services” and refusing to repair “defective conditions with life-threatening potential.” Professing his good faith, Donald made an offer to the city to temporarily house homeless people in the 14 apartments that he had been able to empty. City officials saw this for what it was, a scare tactic to drive out the rest of the tenants, and they rejected it.

1984: In an interview with The Washington Post, Donald offered himself for the post of nuclear arms negotiator with the Soviet Union. Describing himself as a master deal maker, he said all he would have to do is get “updated” on the subject. “It would take,” he said, “an hour and a half to learn everything there is to learn about missiles. I think I know most of it anyway.”

1986: 100 Central Park South again. The tenants had won their case the building couldn’t be demolished and they were staying. Donald, piqued, sued their law firm for engaging in an “illicit scheme of commercial blackmail.” A federal judge swiftly threw out the suit.

1989: Donald reportedly went to wife Ivana’s plastic surgeon to remove flab from his chin and waist by liposuction. He also went for hair transplants and scalp reduction to disguise his creeping baldness.

1990: Donald was overextended with debt. His casinos were defaulting on bond interest. He divorced Ivana, and his business was essentially in the control of his creditors, who kept him on for his celebrity name and gave him an allowance.

1991: Donald displayed his new wife-to-be, Marla Maples, at a prizefight at his Taj Mahal casino. The crowd chanted, “Mar-la! Mar-la!” Donald beamed. A writer from Esquire was with them, doing a profile on him. Referring to the press, Donald told the writer, “You know, it really doesn’t matter what they write, as long as you’ve got a young and beautiful piece of ass.”

And so on. And so on. But you get the idea: Trump is a class act who always tells the truth and keeps himself in the public eye by bullying people regularly with frivolous lawsuits.

At the start of his career in hype and carnival barking, the press fawned over him; he made great copy. It’s refreshing that reality has finally crept into the coverage.

Another species of reality crept in on December 12, when O’Brien did a book signing at Coliseum Books on 42nd Street. As the event drew to a close, according to a witness, a man approached O’Brien at the signing table, leaned over, and told him quietly that if he didn’t stop doing publicity for the book, “we’re going to get you.” The man was Marc E. Kasowitz, Trump’s lead lawyer in the lawsuit.

Asked by the Voice if he was at the book signing, Kasowitz said, “No comment.” Asked about the remark the witness overheard, he said: “I never said that to anybody” and then he laughed nervously.

Beyond the Killing Fields, Donald Trump, Donald Trump crooked history, The Art of Being the Donald, Timothy O'Brien, Trump threatens to sue journalist