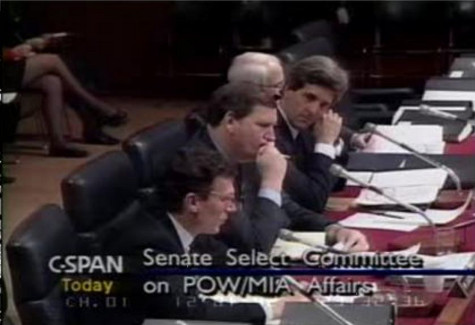 Little by little the truth about American prisoners left behind after the Vietnam war creeps out from under the government’s cover-up blanket.

Washington sources are now reporting that ground code markings of the kind used by prisoners to identify their locations have been sighted in Laos much more recently than had previously been disclosed. Until now, the freshest sightings to have been reported publicly were photographed by Air Force intelligence in 1988 or 1989. The new information indicates that sightings of what appeared to be fresh distress markings occurred in years even after that.

All this, of course, goes to the aching question of whether some POWs may still be alive now, in October 1992, almost 20 years after the signing of the so-called peace accords with Hanoi. And it tells us also that a cover-up, when government makes it a priority, can be sustained across multiple presidencies — this time five of them, from Richard Nixon through Gerald Ford, Jimmy Carter, Ronald Reagan and now George Bush.

The new evidence that is finally unraveling the cover-up is emerging largely from the inquiry by the Senate Select Committee on POW/MIA Affairs, headed by Democratic Sen. John Kerry as chairman and Republican Sen. Robert Smith as vice chairman. There are differences on the committee as to whether any men remain alive today. But there seems near-unanimity that the men were written off and that the cover-up was a well-coordinated plan that involved far more than bureaucratic bungling at the Defense Intelligence Agency.

Was this a conspiracy of evil? More likely it was the kind of failure that has to do with the banality of flawed leaders under pressure choosing their version of realpolitik. It also has to do with subordinates taking orders and saving face. For 20 years. The men who negotiated our Vietnam withdrawal in 1973 wanted to bury the draining issue forever. Besides, another draining issue was suddenly sapping the White House’s ability to govern — Watergate.

The North Vietnamese had surely held a number of prisoners behind ­ probably as blackmail to get the $3-4 billion in development aid that documents suggest had been promised to them by then-National Security Advisor Henry Kissinger but which they were never to receive. The White House decided it could not admit to the American people, without throwing itself on the pyres of national disgrace, that men were still imprisoned in Indochina and that the government that sent them there to serve their country felt itself too impotent to get them out. And Hanoi, having been denied its “reparations,” had no motive for either acknowledging or releasing the captives. And so it has gone for two decades. As Kissinger once said in a different context: “If I had to choose between justice and disorder, on the one hand, and injustice and order, on the other, I would always choose the latter. ”

Like Kissinger – and George Bush – most of the Executive Branch men from the Vietnam era and directly afterward have continued to function and prosper in the Washington world of power, which helps explain the tenacity and longevity of the cover-up. Consider, for example, the following story of how an offer Hanoi made to Ronald Reagan in 1981 to return live American paws in exchange for $4 billion was dragged recently into the sunlight by the Senate committee.

In late 1985 or early 1986, the committee’s vice chairman, Sen. Smith, then a member of the House, was informed by a government official that Vietnam had made this offer in 1981 and that it had soon thereafter been rejected at a high-level White House meeting chaired by President Reagan. The government official also brought this information to William Hendon, a House member who has since worked for Sen. Smith and later as a staff investigator on the POW/MIA committee.

On Jan. 9, 1986, Smith and Hendon, at their request, met in the Oval office with Reagan, Vice President Bush and others to ask about the 1981 offer. Reagan at first said he could not remember such a proposal from Vietnam. Bush said he remembered an offer but thought it involved POW remains — not live Americans.

Now move ahead six years to the present. In the early part of this year, Richard Allen, Reagan’s first national security adviser, gave testimony that flatly contradicted the Bush recollection of Hanoi’s offer. Allen had attended the 1981 meeting at which the offer was rejected. In a closed-door deposition to investigators for the Kerry-Smith committee, Allen said that Hanoi’s offer was about live POWs.

A few months ago, Hendon was charged by some committee personnel with leaking documents. He called the allegations “trumped-up” and resigned the committee job. Speaking to a reporter for The Washington Times, Hendon scoffed at Bush’s contention that Vietnam was talking about remains, not live prisoners: “At that time Vietnam had already been giving back remains with no strings attached.” Hendon also said that Vice President Bush phoned him the day after the Smith-Hendon meeting with Reagan and Bush and angrily denied that the administration had received any POWs-for-cash offer. “He said it was categorically false and potentially damaging to the presidency,” recalled Hendon.

Little by little, we get pieces of the truth.