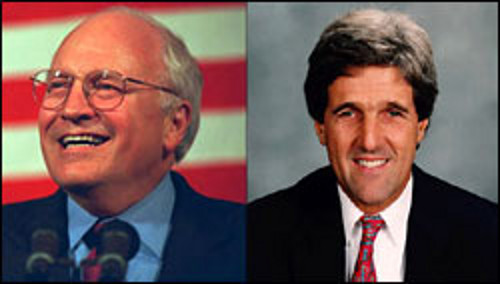 The story I am about to lay out is one of high irony, for it is a story of how—roughly a decade ago—John Kerry, the Democrats’ presidential candidate, allied himself with Dick Cheney, George Bush’s vice president, on a critical issue—Vietnam prisoners of war.

Cheney was then the Secretary of Defense for the first President Bush, and Kerry, then as now a U.S. senator from Massachusetts, had been named to head the specially created Senate Select Committee on P.O.W.–M.I.A. Affairs. The committee’s life ran for nearly a year and a half—from August 1991 to January 1993, when its final report was issued.

It was a voluminous, 1,223-page tome that said, in its brief executive summary, that beyond the 591 men returned in 1973 after the Nixon administration signed its peace treaty with Hanoi, “a small number” may still have been held in captivity, but that there was “no compelling evidence that proves” any of these men were still alive in 1993. Evidence but not compelling enough. Evidence but no proof. The summary read like a pinch-minded legal brief.

Amazingly, the 1,000-plus pages of the body of the report repeatedly challenged the summary, spelling out in detail instance after instance of stark evidence that Hanoi had held back not “a small number” but a very sizable contingent of American prisoners, probably for a ransom that never came. Documents unearthed by the committee staff put the number in the hundreds, maybe as many as 700.

Kerry’s collaboration with Cheney was not something that took place in public. They didn’t appear together or hold joint press conferences. Mostly, Cheney kept out of sight. Nonetheless, the two of them were working closely together. In effect, Kerry made the Department of Defense a virtual partner in the probe.

For example, Kerry had his top aide, committee chief of staff Frances Zwenig, specifically coordinate and orchestrate the panel’s public hearings with Defense Department officials—even though the Defense Department was supposed to be the main agency under investigation for covering up the existence of the prisoners.

In a memorandum for the record, one staffer protested: “Speaking for the other investigators, I can say we are sick and tired of this investigation being controlled by those we are supposedly investigating.”

When committee staffers complained that the Pentagon was withholding pivotal P.O.W. documents, Cheney in response wrote a letter to his subordinates telling them to give the committee everything it wanted. It was a wink-wink letter. The stonewalling continued right up to the committee’s expiration. The Pentagon never turned over the key documents. Kerry, afterward, said the Pentagon’s cooperation had been exemplary.

As the panel’s final report was being written, the lobbying by interested parties was intense. The Pentagon was the heaviest lobbyist, and it had an inside track to Kerry. It was chief of staff Zwenig who, on Kerry’s instructions, personally shepherded the Pentagon’s alterations into the report. None of these insertions was identified as coming from the Pentagon. Anyone reading those passages would assume the committee had written them.

Cheney’s motives were obvious. He and the first President Bush—and all the other presidents since Nixon—have continued the cover-up, realizing the political immensity of leaving these men behind and afraid of the public firestorm that would ensue if they revealed the truth. Powerful reputations and governments have fallen for far less serious wrongs. So, across seven presidencies and 31 years, official Washington has insisted on this inglorious national “secret.”

Sadly, the mainstream press, with few exceptions, has gone along with the government’s story, rarely digging beneath the surface. They, like most Americans, were anxious to bury the Vietnam experience.

Kerry’s motives for burying the truth largely remain a mystery. All one can tell from the record is that at some point fairly early in the committee’s life, he began talking about the importance of putting the war behind us and normalizing relations with Vietnam, and it became clear that he was sweeping the scandal out of sight.

Kerry has consistently denied any cover-up, insisting that he had conducted the most exhaustive investigation of missing soldiers in the history of warfare.

I have been researching and writing about this story for a dozen years, roughly from the start-up of the Kerry committee—a time when I was optimistic that this decorated Vietnam veteran was going to go for the truth. I have asked myself many times why he didn’t. I have also pondered what Nixon might have been thinking when he agreed to accept the peace treaty knowing that all the prisoners weren’t being returned.

The best explanation I can imagine for Nixon in January 1973 is that in his rush to extricate the United States from the Vietnam War, realizing that Washington had little leverage left at the negotiating table, he told Henry Kissinger to sign the document anyway, possibly thinking that there might be some future way to get the rest of the men back. (The consensus in the intelligence community is that over the years, when it became clear to the Vietnamese that ransom was never going to be paid, Hanoi had most, if not all, of the prisoners executed.)

As for Kerry in 1991, since I recognize that the human species is vulnerable to great leaps of self-delusion, I wonder if it’s possible that, given the odds that few prisoners could still be alive, Kerry told himself that the greater good for America was simply not to stir a national furor (and possibly damage his career), but instead move toward restoring relations with Hanoi so as to put the past away.

The past, though, can never really be put away. It tells us who we are and how we got that way. And Kerry knows, better than the average citizen, that men who have gone into battle for us at great risk must be properly honored. Those P.O.W.’s kept their part of the covenant with their country. We didn’t keep ours. And some day we must own up. What better time than now? What better person than Kerry, who lived through Vietnam and now says he wants to give the nation “a fresh start”?

Yes, he allied himself with Cheney in the past. And now Cheney and President Bush are his adversaries in a presidential election. The twist of history is that the core issue of this election is about truth-telling and whether Bush and Cheney, imbued with ideology and visions of grandiosity, misled the nation into the war with Iraq.

Department of full disclosure: I am not someone who wants John Kerry to lose this election. To my mind, he is clearly a better man and leader than his opponent, who has lost his way. But he is also a man who, like many politicians embedded in government for a long time, has on some occasions allowed his ambition and perhaps his hubris to cloud his judgment. So why, with this piece, have I now written two stories for the Voice (and dozens of other stories elsewhere in the past) about Kerry’s role as chair of that committee—stories that might cost him some votes? The answer is twofold. First, history and honesty are consequential. A nation can’t claim to be a beacon of democracy for the world if the beacon is built on a foundation of lies.

And second, this story has become personally important to me, probably because of my life’s arc. I’ve been in the army, and I’ve been a war reporter in India and Indochina, where military people have looked out for me. I have learned that duty, honor, country, and band of brothers are not words to be used lightly in political campaigns. I have learned never to confuse soldiers with the policies of the men in a nation’s capital who have sent them into war. And I believe that abandoning men who have fought under their nation’s flag is a terrible betrayal.

In his Democratic convention speech last week, Kerry said: “We have it in our power to change the world again. But only if we’re true to our ideals—and that starts by telling the truth to the American people.”

I hope John Kerry will turn out to be a different kind of leader. I hope he digs deep and tells us the truth about the band of men—not the “small number” they were reduced to in his committee’s report—who were left behind in 1973 in Vietnam. That would truly be a fresh start.