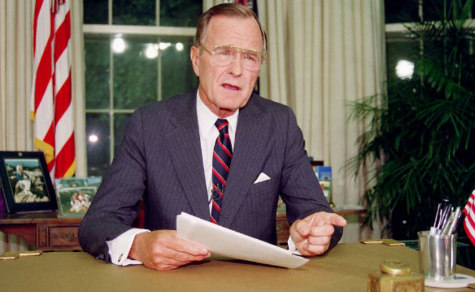 Will George Bush finally come before the Senate Select Committee on MIA/POW Affairs, as the committee seeks, to tell what he knows about American prisoners left behind after the Vietnam War? And if he does, will the prisoners turn out to be yet another shadowy issue on which this president – and former CIA chief and former vice president with responsibility for intelligence activities – claims to have been out of the loop or uninformed?

An awful lot of people want to bury this issue. Some newspaper stories even call it a “myth,” suggesting that the notion of abandoned — prisoners was kept alive primarily by right-wing “hawks” as a way of continuing the ideological battle over what happened in Vietnam.

But the evidence is hardly ideological. And President Bush knows a great deal about this evidence – as do four living ex-presidents, from Richard Nixon (where the story began) through Gerald Ford, Jimmy Carter and Ronald Reagan.

Some of the evidence is on Nixon’s Oval Office tapes. The Senate committee’s hearings have established that he held discussions about the prisoners in his office with aides such as Brent Scowcroft (now Bush’s national security adviser) and with Pentagon officials. The committee is now negotiating with Nixon for release of those tapes.

Beyond the blame that falls to presidents, all of us bear some responsibility for writing off these missing men. But our collective embarrassment is no justification for not going after the story now.

One doesn’t have to look very far for places to start digging. When the Vietnam accords were signed in January, 1973, the State Department itself said that Hanoi’s list of American prisoners to be repatriated omitted any of the more than 300 men missing in Laos. A large number of those men were known to have been captured alive.

Nonetheless, by the end of March, Nixon had proclaimed them dead, saying that all the living prisoners were on the list Hanoi had provided. Three former defense secretaries from this period – Melvin Laird, Elliot Richardson and James Schlesinger – testified to the Senate committee last week that they concluded at the time that men were almost certainly alive when Nixon said the opposite on March 29, 1973. Their testimony, of course, raises the uneasy question as to why they didn’t tell us about this sooner. Everybody wanted so badly to bury Vietnam and put an immovable stone on its grave.

But the evidence did not trail off in 1973. Prisoner sightings by the dozens poured into the Pentagon. Most were given cursory examination and swiftly declared unfounded. Some were actually ignored. But except for the families of the missing, there was no public pressure for an accounting.

In 1981, Ronald Reagan entered the White House and, according to testimony by Reagan’s national security adviser, Richard Allen, was very quickly greeted by an offer from Vietnam, through third countries, to exchange live American POWs for $4 billion in development aid. The offer was rejected.

But the intelligence reports indicating the existence of prisoners did not let up, and in May of 1981 the Reagan administration, through the CIA, sent a secret band of Laotian mercenaries into Laos to check out one major sighting. The foray was said to be a failure, finding no prisoners. But the mercenaries also report their belief that before they reached the supposed prison camp, their presence in Laos had been detected by the local Communist forces. Were the prisoners moved?

This covert operation was confirmed by Pentagon officials, but other reports, as yet unconfirmed, say that similar operations continued for several years. At least one such operation, according to these reports, was conducted not by mercenaries but by American special forces, who were said to have infiltrated at night and, using sensitive sound equipment, brought back a recording of American conversations.

All these activities were conducted under the oversight of Vice President George Bush, who was the point man on intelligence matters for the White House.

At about this same time, in the mid-1980s, two reports done in the Pentagon itself – and suppressed there – showed clearly that while the White House was calling the POW/MIA issue “a matter of highest national priority,” it was getting anything but priority.

These reports, whose existence was originally denied by the Pentagon, have been pried loose recently by the Senate committee. One, the Brooks report done in 1985, said the Pentagon’s intelligence search for prisoners had not only been cursory and slipshod but had been eroded by a “mindset to debunk … we will not withstand scrutiny very well. ” The Gaines report in 1986 was even more damning, saying that the Pentagon’s POW intelligence office was such “a wasteland” that 600 reports of live sightings had been backlogged and “have not had any evaluation.”

Five months ago, the staff of the Senate committee, in an unreleased report, reached the preliminary conclusion that, as summarized by one staffer, “There can be no doubt in anybody’s mind that POWs were alive . . . as late as 1989.”

This is not ancient history. Some prisoners may still be alive. Let us make them and the truth a priority – for the first time.