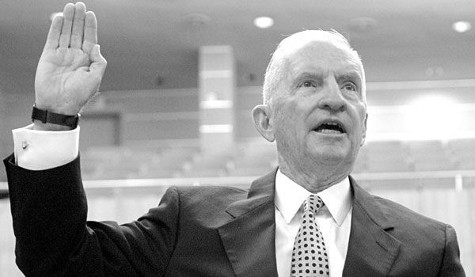 On March 23, 1987, 14 years after our government had assured us that all live American prisoners from the Vietnam War had been returned to us and that all the rest of the MIAs were dead, Vice President George Bush wrote a letter to Ross Perot in which he talked without any qualifications or reservation about Americans still being held in Indochina.  He wrote: “I have worked with you all along the way hoping that your energy and principled determination would lead to what you and I both want — the return of our POW/MIAs. I will continue to do everything in my power to help gain their return.” Later in the letter he spoke of “those in the United States government who are working day and night to get the POW/MIAs released.”

That letter and similarly stunning documents were pried loose from their secret places last week by the Kerry-Smith Senate Select Committee on POW/MIA Affairs, which has been methodically exposing the two decades of duplicity and cover-up by the executive branch on the issue of the existence of living prisoners.

George Bush — as head of the CIA or as vice president or as president — has never admitted publicly or told the families of missing men what he said unequivocally in that letter:  Men were still alive in 1987. And in the opinion of Perot and many others, including this reporter, who have spent time digging into the voluminous evidence, some of those men are very probably alive today.

In public, George Bush says only the opposite – that no evidence exists that any of our men are alive. The reason he cons us is because to admit publicly now, after nearly 20 years, that the government knowingly left men behind would destroy the careers of many of Washington’s power elite, not to mention the re-election chances of George Bush.

Most of the men who were abandoned were soldiers from the CIA’s secret war in Laos. Their clandestine activities, if revealed, would have been a potential embarrassment to official Washington. This might be part of the explanation for why the White House made only half-hearted attempts to get these men back from their Communist captors.

But perhaps the central reason has to do with attitudes, both in the Communist capitals and in Washington. The Communists kept the men as bargaining chips to get the billions in reparations they believed they had been promised by Richard Nixon and Henry Kissinger. Washington sneered at that promise, saying that because Hanoi had violated the 1973 peace accord, all bets were off.

More crucially, our government could not bring itself to admit we had lost the war. It decided instead to punish the Vietnamese, to bring them to their knees economically through an international embargo and other sanctions. We vowed we would not lift these punitive measures until they accounted for all the MIAs. And we haven’t, and they haven’t. So the prisoners have just rotted there.

Our policy, regardless of Hanoi’s abuses, was a stony-headed prescription for stalemate, unworthy of a world power, worthy only of a self-defeating nation that had lost its way. Surely there were and are sophisticated, back-channel ways to negotiate the release of those men without losing face or sacrificing our integrity. History is helpful here; we should try to remember that when the French failed before us and pulled out of Indochina in the 1950s, they secretly ransomed — yes, bought back with cold cash — their missing men.

When Ross Perot testified before the Senate POW committee last week, he was shown a packet of newly uncovered documents, among them a memo from a White House official describing a conversation he had had with Gen. Colin Powell, then deputy national security adviser. The date was March 21, 1987. The White House official, according to the committee, was Craig Fuller, then chief of staff to Vice President Bush and more recently the manager of the Republican convention in Houston. In the memo, Fuller said: “We still believe that it is not wise for Ross [Perot] to go [to Vietnam] . . . after 14 years they have denied live Americans . . . if they were to produce live people, can you imagine what will be asked for? Our policy interests are not served by Mr. Perot’s interests at the moment.”

Perot, who has for years said the evidence showed that men were still alive, was clearly taken aback by this document. He insisted on reading the passage into the record, after which he said, angrily:  “Our core problem is summed up right here in this little three-line statement. See, this town focuses on how things look, not how things are. Everybody has been worried to death, since this whole issue {that} keeps coming up is how will it look if they ever come home?

“See, that’s not the issue. The issue is they’re our men, they went into combat for us, we left them, we owe it to them to bring them home. It won’t look pretty back here, but we can build a consensus here that it’s the right thing to do.”

Unfortunately, George Bush has a different agenda. Last month, at a conference of the families of missing men, some of the frustrated relatives stood up as Bush was speaking and chanted: “Release all files. Tell the truth. No more lies.”

His response was to snarl at them to “Please shut up and sit down.”

Maybe it’s he who should sit down.