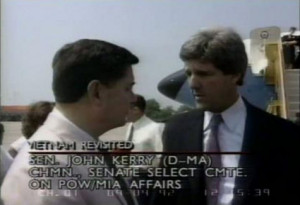 The mystery of what happened to the American prisoners who didn’t come home after the Vietnam War has never been a front-burner issue in this country.

That’s strange, isn’t it, when you remember how, in 1971 and 1972 when the peace accords were being negotiated, our government led us to believe, in language reserved for the noblest of heroes, that ending the torture and bringing home the prisoners was Washington’s first priority.

Well, nearly 600 did come home, all in 1973 – but hundreds more who were believed alive did not. We’have never received a full accounting, neither from the government in Hanoi nor from its proteges in Laos. Nor, sadly, from the White House or the Defense Department or any of the intelligence agencies.

On our side, for 20 years, files have been destroyed, witnesses intimidated and information suppressed. You see, once the Executive Branch decided that it was too difficult to get the men back, or it would cost us crucial bargaining leverage needed for Cold War geopolitical concerns that were regarded as more, well, important, then as time passed, it became more and more difficult and embarrassing and shaming to admit that men were indeed kept behind by Hanoi – and left behind by us. They were, in a sense, sacrificed to what our leadership decided was a greater cause.

Is this so different, you might ask, from all the wars since the beginning of time? Have not soldiers always been asked to sacrifice themselves for their tribes, their religions, their n ation-states? Have not some always been left behind and unaccounted for when wars have ended? Yes, surely. But I think the explanation for why this time was different is that this time, the public knew about it. It wasn’t a secret, held only in high places. This was the first big American war that had happened in the age of the communications explosion, so it was on television. And the print press was there up close, too, writing for example about the “secret” CIA war in Laos.

Thus when the Vietnam peace accords were signed in Paris in January of 1973, there were stories saying that the prisoner lists were incomplete, that many men were being hidden from us, perhaps as bargaining tools. The stories said that most of these men were held in Laos.

But the stories soon faded from sight because most of America wanted desperately to forget Vietnam. For a society that has never taught its young the art of losing, it was the ultimate bad dream – a misguided war that America lost.

So, to avoid pain, we fuzzed over our memories, and through all of five presidencies, we let the White House and its minions keep the secret almost out of sight.

It would have been completely out of sight except for the families of the missing men. They didn’t buy the secret. At first they had believed the government’s assurances that everything was being done to locate any men still alive arid to get a full accounting from the Communists about those who were dead. But over the years, it became obvious to the families that information was being withheld from them ­ reconnaissance  sightings of possible prisoners, satellite photos of SOS-type markings on the ground, potential live sightings by Asians on the scene who later emerged as refugees and gave sworn depositions.

Frustrated but determined, the families and some veterans groups have kept the story from being totally’ buried. One by-product is a special Senate committee that has been investigating the POW/MIA issue for a year. Much fresh information has emerged, all pointing to two decades of cover-up.

Some members of the committee, including Vice Chairman Bob Smith (R-N.H.), a Vietnam veteran, believe it’s possible that some men may still be alive, probably in Laos. Others on the committee seem more inclined to soften the edges and play down the more startling disclosures — perhaps out of a fear that to reveal everything in the files would cause too destructive an earthquake in the Washington government machine. It’s fair to say that a lot of careers are probably at stake.

The Smith group wants to keep digging until the last stone is turned. But they’re nowhere near finished and the committee’s mandate expires on Jan. 3. Not to extend it would be the ultimate dishonor to the missing men.

This digging has to continue if, given the amount of official disinformation we’ve been fed through the years, we are ever going to be able to distinguish between smoke and substance.

For instance, last week, after little-noticed Vietnamese-American discussions in Hawaii and then Washington, a high-level u.s. delegation left for Hanoi on POW/MIA business. Something more than cosmetic seemed
afoot since the delegation included key officials from Defense, State and the National Security Council. The Hanoi talks were held over the weekend, and the closing communique declared that major progress had been made. The Vietnamese, for the first time, said they were giving Washington access to their prisoner archives. Laos, the heart of the mystery, was not mentioned.

What does this mean? Is it progress or is it instead a deft prelude to announcing, down the line, that all the men have been accounted for by Hanoi and they are all dead?

We need the truth, not communiques.