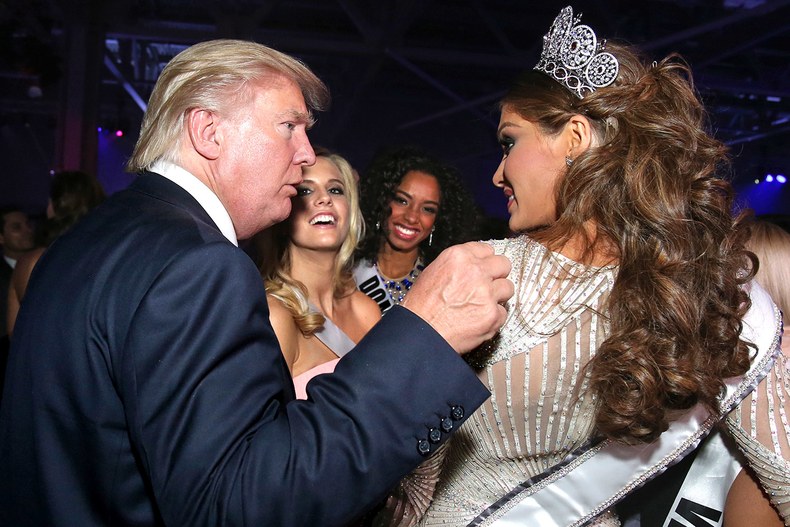 The sound to be heard these days from the Trump wallow is — not surprisingly — oink. Donald Trump has finally removed the last shred of his disguise and revealed a creature who talks publicly of his women companions in language no sailor would dream of using about those who have shown kindness to him.

I mean no disrespect to our snouted barnyard friends when I say that Donald has descended into public swinishness. First he dumped his wife, flaunting his new friend in her face on the ski slopes. Now he dumps the friend, but lets her find out from the newspapers. Then he laughs and jokes about her front-page humiliation chortling over how naive she was to believe his pledge that the diamond ring was an engagement bond, when all he was doing was throwing some business to his friends at Tiffany’s.

It is one thing to observe that the age of chivalry seems to be in decline and quite another to believe that therefore it is now acceptable to engage in caddishness so snickeringly brutish as to suggest the unraveling of a mind.

Of maybe what it suggests is a form of hormonal imbalance yet to be studied by medical science. Could Donald be suffering from all those characteristics that men have cited over the generations as peculiar only to women, citations designed to keep men in their privileged, ruling place and to keep women in indentured thrall? Has he not become a classic exhibit of shrillness, cattiness, shrewishness?

Does this not add up to a clinical case of emotional instability? Are we supposed to excuse his conduct by saying, delicately, that this vulgarian is experiencing a change of life?

No, Donald hasn’t changed. He has always been a vulgarian. but before any of you nod and smile in smug superiority, let us remember how many among us contributed to the creation of this negative cultural totem.

Way back at his beginnings, when he was razing the Bonwit Teller building to make way for Trump Tower and decided to demolish the valued Art Deco friezes that graced the Bonwit facade, how loudly did we hiss and boo that he had broken his word to save the stone carvings and give them to the Metropolitan Museum? No, this is New York, where macho and bravado are honored and celebrated, so we privately envied his raw, nose-thumbing posture — and the fact that he got away with it. And what did he say when some criticized him for reneging? He of the hormonal imbalance said, with a sneer: “Who cares?”

And what of all the lawyers and money men who strut around pretending to be the brilliant collossi of this town? What did they do when this carnival barker came to them for hundreds of millions of dollars to build his house of cards? Why, the gave it to him, and then they turned to us and told us how smart a deal it was because this shallow boaster was going to to wondrous things for New York and its economy. Now of course, as the Trump empire tumbles, these inspired financiers at Citicorp, Chase et al are panicking.

And then, alas, there’s the press. Donald could never have risen so quickly without the huzzahs of the star-struck media. Magazine cover stories, admiring newspaper profiles and air-headed television puff pieces all fed his hubris and grandiosity. Reporters clamored for invitations to his yacht and to his casinos. Not a word in print about his raging hormones. No hint of his testosterone attacks.

The conviction that money makes its own rules holds too strong a grip on the power mythology of New York. The so-called shakers and movers who should have clung to at least a shred of their critical judgment were instead awed and transfixed, even when this con man announced that he was a P.T. Barnum resurrected. He was hollow but somehow he was what the big boys wanted to be when they grew up.

Donald imagined himself Robert Redford, the dream of every woman. No matter that he looked like Chubby the Chipmunk and was said to have had himself redone by liposuction and hair transplants. The makeover didn’t help much, but that didn’t slow his self-admiration. His mirror still told him he was the fairest of them all.

“You know,” he said to a magazine reporter, “it really doesn’t matter what they write as long as you’ve got a young and beautiful piece of ass.” The reporter put it in his notebook. Donald wanted him to print it. The true cad knows no self-consciousness, only self-hypnosis.

The newspapers continue to record his every swinish act. They see no choice. They, like so many others, were in at the beginning, playing Dr. Frankenstein, stitching Donald together, bringing him to life with bolds of headline lightning. Thus they must follow him until the end. So still he stalks among us, giving the male species a name even worse than any we have legitimately earned.

It probably falls now upon medical science and psychoanalysis to fully explain the Donald phenomenon. Will his body offer up the revelation that hormonal imbalance is just as much a male thing as it is a female one? What role will the scientists find that the moon and the tides play?

Or in the end will they perhaps discover something entirely more pedestrian? Could it be that this is just a case of Trump the Tramp?