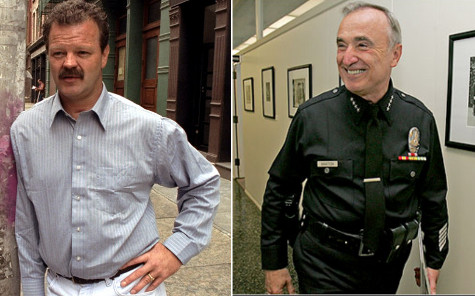 In the late afternoon of April 26, in Brooklyn’s Prospect Park, a 27-year-old woman ran up to a police car and, in tears, told the officer she had just been raped. Two days later, a Daily News columnist wrote that the woman was a “hoaxer” and her story a “lie.” He repeated the accusations in a column in May, ignoring the corroborative evidence that had emerged in the meantime from the police lab.

Now the unnamed woman has filed a $12-million damage suit against the newspaper and the columnist, Mike McAlary, charging defamation.

These details are but the skeleton of a tangled story that involves the police department’s top officials, their close relationship with the columnist and the inability of both his newspaper and the police brass to see the dangers in this kind of personal connection.

McAlary is one of a handful of News staffers who occasionally share the sporting life with Police Commissioner William Bratton and his sidekicks at the commission’s table at trendy watering spots.

When McAlary wrote his first “hoax” column, basing it on unnamed police sources, Bratton was embarrassed, probably because he knew that insiders in the press would likely assume that someone at the top had fed it to McAlary. So Bratton, fearing backlash from women over the touchy subject of how the police handle rape victims, issued an apology. He said he regretted that police “doubts” about the case had been “leaked” to the press, “particularly since some of the doubts have been refuted by the medical evidence that has now been surfaced.” The evidence he referred to was the laboratory finding of semen in the woman’s vagina and on her running shorts.

But the commissioner also apparently feared backlash from McAlary, because in his remarks he carefully never mentioned the columnist or the Daily News. Even later, when Bratton went further and said, “We have physical evidence that a rape did occur” — this was after McAlary’s second column said flatly that the police lab was wrong — the commissioner nonetheless still did not refer to the columnist.

In the first column, McAlary said, “The woman was kind of vocal about being a lesbian.” Of her rape account, he wrote: “It is an outrageous story, really. The woman, who is black and 27 years old, describes herself as a social activist. All we really know about her is that she has an active imagination.”

His sources, McAlary said, told him she “invented the crime…to promote…a gay and lesbian rally this weekend.” And he suggested she should be “arrested herself” because “a false report of rape by a woman looking for publicity is a crime against all women.”

In my reporting on the case, I almost immediately found confusion at police headquarters and a sense that the brass was juggling several agendas, trying to do pubic-relations damage control in an effort to mollify all sides.

About the lab tests, a police spokesman waffled back and forth on the reliability of the reports on the semen. (Semen need not be present to establish rape; in fact it is not present in a majority of rape cases either because the rapist did not ejaculate or was otherwise dysfunctional. But when it is found, it is viewed as strong corroboration.)

At one point, the police spokesman told me that what was found was a substance known as p30. He said this was “a fluid common to males and females but does not constitute semen.” (Similarly, McAlary, in his second column, said: “At best, the lab reported, the substance was saliva, male or female…No semen found. Period.”)

No one else, however, describes p30 in this manner, especially not medical experts. For example, the New York State Health Department’s directive for collecting rape evidence describes p30 as a protein component of semen and says “its presence is regarded as a conclusive indication of semen.” A 1985 article in the New England Journal of Medicine said that “the finding of any p30…establishes that semen is present.” In layman’s terms, p30 is semen.

Still, Daily News editor Martin Dunn said: “Mike McAlary has written twice on the issue and we stand behind him.”

There are a lot of other nooks and crannies in this story, such as the lingering on in certain quarters of some old police-culture attitudes about women, gays and lesbians. That’s what probably got this mess started.

And then, of course, we have the problem of professional behavior being compromised by personal relationships — in this case, ties between the press and the police department. This phenomenon, too, lingers on. And not solely at the Daily News, just in case there are some at other papers who were about to feel too righteous.

The woman who has sued the News saw it this way: “I have had the misfortune of being raped twice– once in the park and again in the media.”