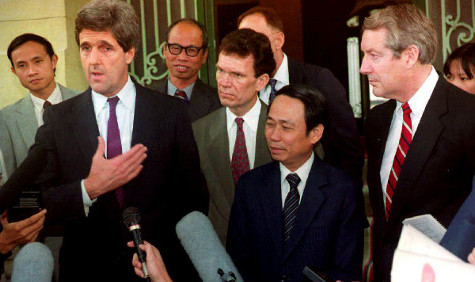 It is quite possible, maybe probable, that a grand charade is being played out in Hanoi and Washington to condition the American public for a closing of the books on the unaccounted-for POWs and MIAs from the Vietnam War – including some men who may still be alive and held in Indochina.

Highly credible information has been surfacing in recent days which indicates that the headlines you have been reading about a — “breakthrough” in Hanoi’s cooperation on the POW-MIA issue are part of a carefully scripted performance. The apparent purpose of this orchestration is to summarily write “finis” to the war and move toward normalization of relations with Hanoi.

Sen. John F. Kerry, chairman of the Senate Select Committee on POW-MIA Affairs, is one of the key figures pushing for normalization. Kerry is currently on a visit to Vietnam where he has been doing two things: (1) praising the Vietnamese effusively for granting access to their war archives and (2) telling the press that there’s no believable evidence to back up the stories of live POWs still being held.

Ironically, that very kind of live-POW evidence has been brought to Kerry’s own committee on a regular basis over the past year, and he has repeatedly sought to impeach its value. Moreover, Kerry and his allies on the committee – such as Sens. John McCain, Nancy Kassebaum and Tom Daschle – have worked to block a good deal of this evidence from being released to the public.

Perhaps the most pivotal of the evidence involves live sightings of POWs or POW distress markings through satellite imagery or air reconnaissance photos or first hand witness reports by Indochinese refugees. Senate sources familiar with the committee’s work say that this intelligence strongly indicates, as one committee document put it, “that American prisoners of war have been held continuously after Operation Homecoming [the release of 591 prisoners in 1973] and remain in captivity in Vietnam and Laos as late as 1989.” Sightings have continued to come in right up to the present, and credible intelligence sources who have examined the data believe, first, that there’s a likelihood that some live POWs are still there and, second, that the committee leadership and the White House are turning their backs on the evidence in their rush to restore relations with Hanoi.

Over the past few months, Committee Chairman Kerry, in firmer and firmer tones, has made no secret of his belief that no live POWs remain, but he denies that he has diluted evidence or tampered with its flow. However, recently uncovered documents make his claim of impartiality hard to credit.

The pattern of Kerry’s behavior goes back at least to April, when the committee staff prepared materials with which to brief the panel members on the subject of live sightings. Sen. McCain – in a bizarre move for a member of an oversight committee trying to determine whether there had been any government bungling or cover-up on the existence of POWs – gave a set of the briefing materials in advance to the Defense Department. As he did so, the Arizona senator, according to a newly unearthed Defense Department memo, told the Pentagon he “felt it was critical that DIA [the Defense Intelligence Agency] be present at this briefing to rebut the assertions” of the committee staff.

Kerry agreed with McCain and took a committee vote, the outcome of which was foreordained, on whether to admit the Pentagon to the briefing. The result was 7-2 — only Vice Chairman Bob Smith and Sen. Charles Grassley voted against — and the Pentagon rebutters were brought in.

The meeting degenerated into chaos when Kerry departed before committee dissenters, such as Sen. Smith, could speak. Other committee members followed Kerry out of the room, but Smith stayed to confront the Pentagon representatives. At this point, Kerry’s staff director, Frances Zwenig, told the Pentagon people, in the words of the Pentagon’s own memo, “that Senator Kerry had not intended the briefing to be carried on after he left and that DOD [Department of Defense] should not continue to answer questions.” The DOD people then walked out on Sen. Smith.

Since that April 9 briefing, Kerry’s bias has come into view in a series of incidents. For example, he has ordered the shredding of documents to prevent their becoming public.

Staff director Zwenig has coached Vietnamese officials on how to explain the deaths of all POWs, as detailed in a July 17 memo from the American embassy in Laos. Kerry himself coached the Pentagon – this according to a Pentagon memo of Oct. 7 — on how to “put a lie to” the committee staffs conclusions that the photo imagery was valid evidence of the recent existence ofPOWs.

Kerry, in his stage performance in Vietnam, said this week of Hanoi’s cooperation: “Everything we’ve asked for has been done. ” This is just not true. What about demanding that Hanoi intervene with its client state, Laos, where the bulk of the live sightings have been recorded?

Kerry may indeed believe personally that all the POWs left behind in 1973 are now dead. But his belief could not be a secure one if he can establish it only bydistorting and suppressing credible evidence to the contrary.

He said at committee hearings that he would leave no stone unturned in his quest for a complete accounting. But he has left whole rock piles untouched. As a result, the dissenting group on his committee is in revolt, as well they should be. Live prisoners, if they are there,  deserve a lot better than a political burial.