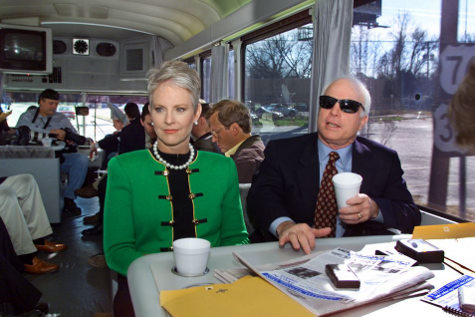 John and Cindy Mc Cain on the “Straight Talk Express” in So. Carolina, 2000. (Photo: AFP/Getty Images)

This article first appeared on apbnews.com in 2000

The voters who were drawn to John S. McCain in his run for the Republican presidential nomination this year often cited, as the core of his appeal, his openness and blunt candor and willingness to admit past lapses and release documents that other senators often hold back. These qualities also seemed to endear McCain to the campaign press corps, many of whom wrote about how refreshing it was to travel on the McCain campaign bus, “The Straight Talk Express,” and observe a maverick speaking his mind rather than a traditional candidate given to obfuscation and spin.

But there was one subject that was off-limits, a subject the Arizona senator almost never brings up and has never been open about-his long-time opposition to releasing documents and information about American prisoners of war in Vietnam and the missing in action who have still not been accounted for. Since McCain himself, a downed Navy pilot, was a prisoner in Hanoi for five-and-a-half years, his staunch resistance to laying open the POW/MIA records has baffled colleagues and others who have followed his career. Critics say his anti-disclosure campaign, in close cooperation with the Pentagon and the intelligence community, has been successful. Literally thousands of documents that would otherwise have been declassified long ago have been legislated into secrecy.

For example, all the Pentagon debriefings of the prisoners who returned from Vietnam are now classified and closed to the public under a statute enacted in the 1990s with McCain’s backing. He says this is to protect the privacy of former POWs and gives it as his reason for not making public his own debriefing.

But the law allows a returned prisoner to view his own file or to designate another person to view it. APBnews.com has repeatedly asked the senator for an interview for this article and for permission to view his debriefing documents. He has not responded. His office did recently send APBnews.com an email, referring to a favorable article about the senator in the January 1 issue of Newsweek. In the article, the reporter, Michael Isikoff, says that he was allowed to review McCain’s debriefing report and that it contained “nothing incriminating”-although in a phone interview Isikoff acknowledged that “there were redactions” in the document. Isikoff declined to say who showed him the document, but APBnews.com has learned it was McCain.

Many Vietnam veterans and former POWs have fumed at McCain for keeping these and other wartime files sealed up. His explanation, offered freely in Senate hearings and floor speeches, is that no one has been proven still alive and that releasing the files would revive painful memories and cause needless emotional stress to former prisoners, their families and the families of MIAs still unaccounted for. But what if some of these returned prisoners, as has always been the case at the conclusion of wars, reveal information to their debriefing officers about other prisoners believed still held in captivity? What justification is there for filtering such information through the Pentagon rather than allowing access to source materials? For instance, debriefings from returning Korean war POWs, available in full to the American public, have provided both citizens and government investigators with important information about other Americans who went missing in that conflict.

Would not most families of missing men, no matter how emotionally drained, want to know? And would they not also want to know what the government was doing to rescue their husbands and sons? Hundreds of MIA families have for years been questioning if concern for their feelings is the real reason for the secrecy.

A smaller number of former POWs, MIA families, and veterans have suggested there is something especially damning about McCain that the senator wants to keep hidden. Without release of the files, such accusations must be viewed as unsubstantiated speculation. The main reason, however, for seeking these files is to find out if there is any information in the debriefings, or in other MIA documents that McCain and the Pentagon have kept sealed, about how many prisoners were held back by North Vietnam after the Paris peace treaty was signed in January 1973. The defense and intelligence establishment has long resisted the declassification of critical records on this subject. McCain has been the main congressional force behind this effort.

The prisoner return in 1973 saw 591 Americans repatriated by North Vietnam. The problem was that the US intelligence list of men believed to be alive at that time in captivity-in Vietnam, Laos, and possibly across the border in southern China and in the Soviet Union-was much larger. Possibly hundreds of men larger. The State Department stated publicly in 1973 that intelligence data showed the prisoner list to be starkly incomplete. For example, only nine of the 591 returnees came out of Laos, though experts in US military intelligence listed 311 men as missing in that Hanoi-run country alone, and their field reports indicated that many of those men were probably still alive. Hanoi said it was returning all the prisoners it had. President Nixon, on March 29, 1973, seconded that claim, telling the nation on television: “All of our American POWs are on their way home.” This discrepancy has never been acknowledged or explained by official Washington.

Over the years in Washington, McCain, at times almost single-handedly, has pushed through Pentagon-desired legislation to make it impossible or much harder for the public to acquire POW/MIA information and much easier for the defense bureaucracy to keep it hidden.