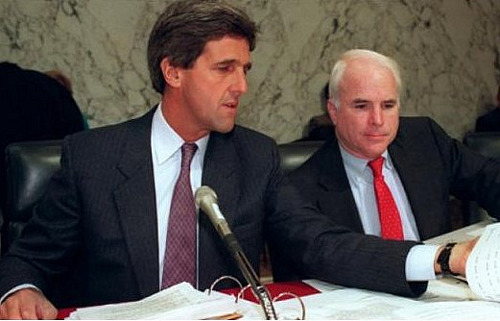 There’s a lot I don’t understand about what’s happening now on the POW/MIA issue.

I don’t understand why, all of a sudden, the White House and some senators are in a hell-bent rush to write off all the unaccounted-for men in Vietnam as dead. I do understand that they want to move toward normalization of relations with Vietnam, which is a good idea after two decades of bitterness.

But it’s still odd that the people pushing for normalization have decided that the only way to overcome any political resistance to the idea is to tell the American public that none of the missing men are alive.

The senators leading this push make up a majority on the Senate Select Committee on POW/MIA Affairs. That’s odd, too, because it is this committee that has over the past year brought forth (1) undisputed evidence that prisoners were still held in Indochina after the Vietnam peace accords in 1973, (2) strong intelligence data that prisoners were alive at least into the late 1980s and (3) recent sightings that indicate some of these men may still be alive, most likely in Laos.

I guess my question is: Why can’t we do both – that is, take some steps toward normalization to show our good faith while still pursuing the credible POW evidence? We could keep our leverage by telling the Vietnamese that our economic embargo would be lifted in small part only until they provide full accountability on all missing men. But we could also tell them that if live men are produced, there will be no reprisals for their detention, such as a reversal of the normalization process.

Instead, President George Bush and his Senate allies on this issue, such as John Kerry, Massachusetts Democrat, and John McCain, Arizona Republican, have put the normalization process on a fast track, while turning a blind eye on the evidence that live prisoners may still be there.

The whole post-Vietnam War story has been a charade from the start, so perhaps we shouldn’t expect this phase to be any different. The Nixon administration wanted so desperately to get out from under the burden of Vietnam that it signed the 1973 accords and announced, though it knew otherwise, that all the prisoners had come home.

The Vietnamese also said all the prisoners had been returned, even as they held some back to be used as bargaining leverage for war reparations. Hanoi must have viewed Washington’s political burial of the prisoners as an unexpected public relations boon, for in the years that have followed, the Communist government, when pressed for information on live prisoners, responded that our own government had itself declared that none existed.

Perhaps the most difficult-to-understand part of the performance is the compliance of the press.

Though American print and broadcast editors dispatched no less than a few thousand reporters to cover the Vietnam War, to my knowledge no major media organization in the aftermath ever assigned an investigative team or any significant resources to find out what happened to the missing men.

Now the press has accepted the government’s latest scenario. A Reuter story out of Washington yesterday said that the notion that evidence of live POWs had been suppressed was “mainly the work of die-hard conspiracy theorists.” The New York Times, in an editorial, also pooh-poohed the possibility of live POWs and urged George Bush to restore full relations with Hanoi before he turns over the presidency to Bill Clinton in January.

The Times’ news coverage, too, has exhibited more interest in accepting the government’s message than in examining the voluminous documentary evidence.

A Times story out of Washington on Oct. 7, dealing with satellite imagery that had picked up what appeared to be prisoner distress signals as late as 1988, chose to dismiss the signals as having been carved into the ground in northern Laos by hoaxers. The story cited unidentified “United States officials in Southeast Asia” who reportedly said that the code letters could have been put thereby Laotian rebels with ties to American POW activists. Now that’s what I call a conspiracy theory.

Over the years, there have been hundreds of satellite and reconnaissance sightings. Yet, somehow, the Defense Intelligence Agency, when it finally analyzes the imagery, always finds that what looked like a distress signal was nothing more than shadows or vegetation. The same brush-off treatment has been accorded to live sightings of POWs by Indochinese who have emerged as refugees.

Many of these witnesses have passed lie-detector tests, yet their evidence, each and every time, has been dismissed as either mistaken or fabricated. Twenty years. Hundreds of sightings. Every last one of them rejected as false. Is this believable?

So now Senator Kerry is back from his latest cosmetic tour of Vietnam with a message that he checked everything out and could find no live POWs. Did the senator think they were going to walk up to him on the street and ask for a cigarette?

Isn’t this worth finding out before we close the Vietnam coffin?